HomeAnimalsOff the coast of Florida, a diver confronts a large shark
Animals

Off the coast of Florida, a diver confronts a large shark 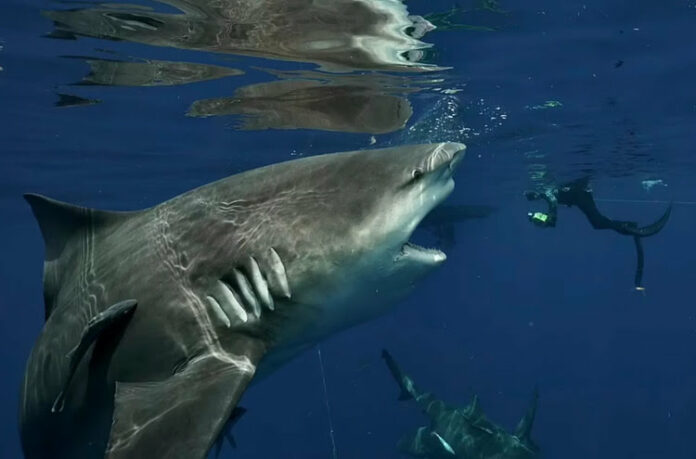 This amazing encounter between a diver and a big bull shark occurred off the coast of Jupiter, Florida. The man even succeeded in photographing the terrifying creature and posting a number of them online.

The enormous shark was discovered while free-diving by John Moore, a photographer and marine life lover. The 55-year-old diver saw sharks frequently, but this one was by far the largest he had ever seen. Along with other bull sharks, the shark—a female who was pregnant—was hunting prey near the surface.

“She was an abnormally large female,” the photographer said. “Very likely pregnant, she certainly hadn’t skipped any meals. She was a very dominant shark, confidently coming right up to me throughout our dive.”

Moore later posted the amazing photos on Instagram, where he frequently posts images of the sharks while diving!

“Up close and personal inspection of the very impressive serrated teeth of a large female Bull shark,” he wrote. “A fish had grabbed the chunk of bait and run toward me for cover, before getting scared and dropping the chunk. This set me up for a shot that’s even too close for my 20mm lens.”

The bull sharks aren’t the friendliest sharks to meet, so even though Moore has a lot of experience with them, this wasn’t the most comfortable experience for him. In actuality, this species is among the most dangerous sharks, along with great white and tiger sharks. These enormous beings can reach heights of up to 11 feet and weigh as much as 1,500 pounds with ease.

The Unforgettable Journey of Star and Denver: A Blind and Deaf Sibling Bond on the Road to Their Forever Home

Beauty on four legs: Meet Frederik the Great, the Horse voted as “World’s Most Gorgeous”

Alycia Burton: The Equestrian Saviour of Threatened Horses: How One Woman’s Unique Approach and Determination Led to Success

HORSE AND CAT: THE TWO MOST UNLIKELY FRIENDS WHO SHARE AN INCREDIBLE BOND

FISHERMAN SAVES A BEAR CUB: THE MOTHER BEAR COMES TO HIM THE NEXT DAY WITH A GIFT

When a man leaves his car door open at a gas station, a stray dog sneaks inside and asks to be adopted

Unveiling the Guianan Cock-of-the-rock: A Striking Bird with Bright Orange Plumage and a Characteristic Half-moon Crest

Bear Pretends to be Human and Creates Road Traffic