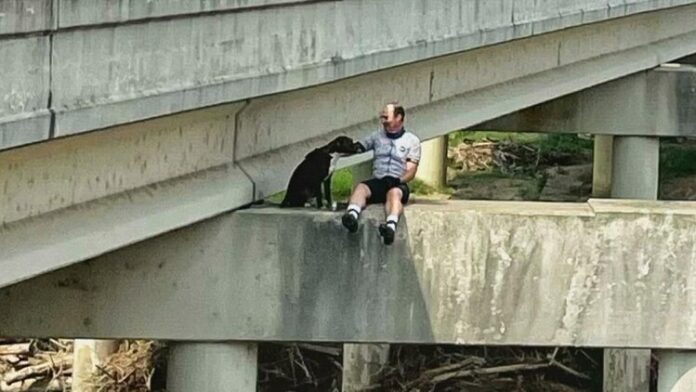 “Smash Bros Plus One” is a team of cyclists who ride through Fort Worth, Texas, every Monday night. A dog’s life was saved on a unique bike excursion.

One week, the cyclists decided to go on an 80-mile adventure to Dallas and back. On their route to Dallas, the riders came into a woman who had stopped her vehicle and was attempting to wave traffic over. She continued shouting that a dog needed assistance. The cyclists were wary at first, but eventually decided to see what was happening.

She made note of the Pit Bull mix that was stuck on a concrete support beam directly below the road.She was about 15 to 20 feet above the ground, so she had no way to get up or down. Someone likely dumped her there.

As the cyclists were figuring out a way to get to the dog, a handyman pulled over to see what the commotion was about. He happened to have a ladder in his vehicle. So, cyclist Chris Williamson climbed down the ladder to be near the dog. He spent about 15 minutes sitting by her, trying to earn her trust.

Once the dog seemed comfortable around him, Williamson picked her up and passed her to the people above him. They cradled her like a baby and gently set her down. The pup seemed relieved to finally be safe.

Previous article
Off the coast of Florida, a diver confronts a large shark
Next article
Spotted Lamb Adopted by Dalmatian After Being Rejected by Her Mother
RELATED ARTICLES
Animals

The Unforgettable Journey of Star and Denver: A Blind and Deaf Sibling Bond on the Road to Their Forever Home

Beauty on four legs: Meet Frederik the Great, the Horse voted as “World’s Most Gorgeous”

Alycia Burton: The Equestrian Saviour of Threatened Horses: How One Woman’s Unique Approach and Determination Led to Success

HORSE AND CAT: THE TWO MOST UNLIKELY FRIENDS WHO SHARE AN INCREDIBLE BOND

FISHERMAN SAVES A BEAR CUB: THE MOTHER BEAR COMES TO HIM THE NEXT DAY WITH A GIFT

When a man leaves his car door open at a gas station, a stray dog sneaks inside and asks to be adopted

Unveiling the Guianan Cock-of-the-rock: A Striking Bird with Bright Orange Plumage and a Characteristic Half-moon Crest

Bear Pretends to be Human and Creates Road Traffic